There is an idiom about plum in Chinese:

Cao Cao of the Three Kingdoms period (220-265) was not only a capable politician in managing state affairs, but also a strategist good at leading troops in going to war.

One summer, Cao Cao was leading his troops in a punitive expedition against Zhang Xiu. It was extraordinarily hot. The burning sun was like a fire, and the sky was cloudless. The soldiers were walking on the winding mountain paths. The dense forest and the hot rocks exposed to the sun on both sides of the paths made the soldiers feel suffocated. By noontime the soldiers’ clothes were wet through with sweat, and the marching speed slowed down. Some solders of weak physique even fainted on the roadside.

Seeing that the marching speed was slower and slower, Cao Cao was very worried because he feared that he might bungle the chance of winning the battle. But how could they quicken their speed? Cao Cao at once callde the guide and asked him on the quiet whether there was a source of water nearby. The guide shook his head, saying that the spring water was on the other side of the mountain, which was very far to have to make a detour to reach. Cao Cao realized that time didn’t permit them to make such a detour. After thinking for a moment, he said to the guide, “Keep quiet. I’ll find a way out.” He knew that it would be to no avail to order his troops to quicken the steps. He had a brain wave and found a good solution. He spurred his horse and came to the head of the column. Pointing his horsewhip to the front, Cao Cao said, “Soldiers, I know there is a big forest of plums ahead. The plums there are both big and delicious. let’s hurry along, and we will reach the forest of plums after bypassing this hill.” When the solders heard this, they immediately slobbered. Picturing in their minds the sweet and sour flavour of the plums, the soldiers felt as if they were actually eating the plums, the soldiers felt as if they were actually eating the plums themselves. The morale greatly boosted, the soldiers quickened their steps a great deal automatically.

This story comes from “The Fake Tangery” in Anecdotes of This World by Liu Yiqing of the Southern Dynasties period (420-589). From this story, people have derived the set phrase “quenching thirst by watching plums” to refer to trying to comfort oneself of others by idle dreams.

Plum drink is very popular in China, especially in hot summer. The dried plum I used were bought in store. And the salesgirl there recommend this type. But I forgot the name. 🙂

Put dried plum and orange peel in a big bowl. Rinse them under water. Then pour the dirty water out. Put them in another clean bowl. Add in 1 L cold water and soak for 30 mins.

Pour plum, orange peel and water into a pot. Also add in another 1L water. Turn to high heat. Bring boil. Then turn to low heat. And simmer for 40mins – 1 hr.

Turn off the heat. Add in sugar. Stir till all sugar dissolved. 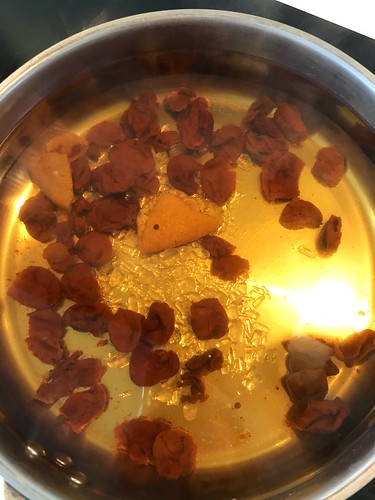 Discard all the plum and orange peels, just leave the water.

You can drink while it’s hot. But if you let it cool down and put into refrigerator. You will find it more delicious. My husband is a big fan.

Perfect for hot and dry summer. 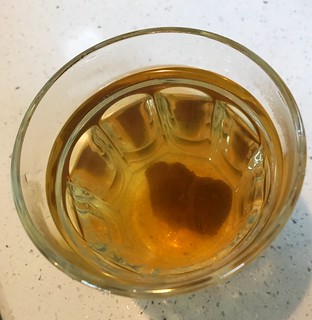