When I made wantons in the morning, some filling was left. And I didn’t have any plan to make more wantons, so I used those left minced chicken filling to cook this dish. I know there is a Scotch Egg. But I kind of cook it in a different way, especially the meat part. So I just called it “Meat Ball With Running Egg”. 🙂

There was about 1/4 left. To add more flavor to the meat part, I also add in 2 tablespoon shredded mozzarella cheese, and 1 tablespoon chopped spring onion.

For the running egg. Boil some water ( doesn’t need to cover eggs, because eggs can be steamed too). When water boils, add in eggs. Cover the lid for 5 mins. Mine are cooked for 5 mins. If you want egg yolk to be more solid, you can cook 1-2 mins longer. Soak them into icing cold water immediately. Later remove the shell.

Divide meat into two balls. Place one meat ball on a plastic wrap, cover it with plastic. Use a rolling pin or palm to flatten it into a disc. Place egg in the center. Gently wrap egg with meat. Twist plastic wrap to make it into ball shape.

Roll meat ball in bread crumbs. Deep fry for about 5 mins or till golden brown.

Cheese is actually not a good choice to add in. Because when cheese melts, it leaks out easily. And the meat ball will stick to the bottom of frying pot. I have to be very very careful to separate meat ball from the pot. But, this dish is still very nice. 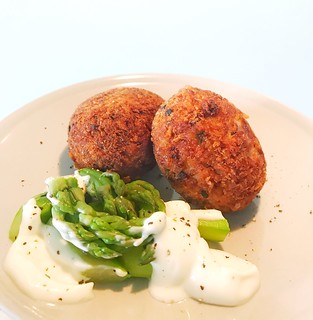 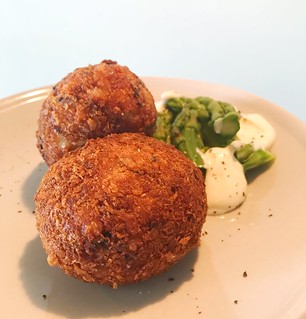 Look at these round and fat meat balls. Here comes the best part. Just take a knife and cut it into halves. Wow, running egg yolk burst out. YUM! 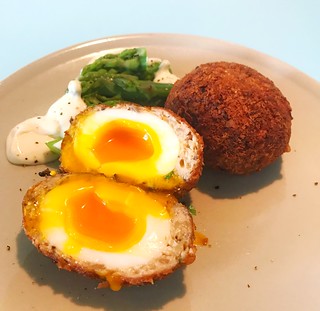 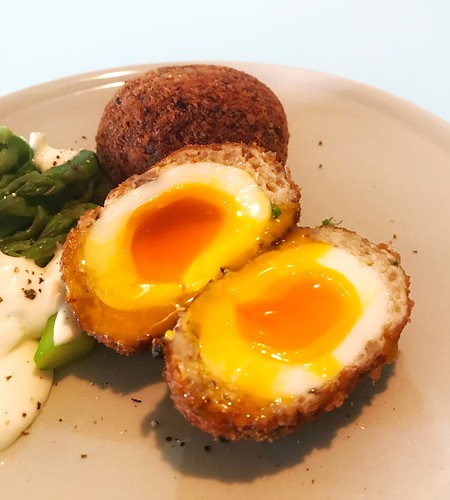